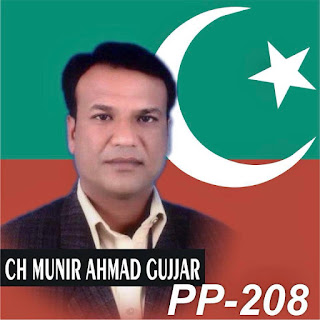 Harassment and Victimization:
Soon after he left PPP (Pakistan People’s Party), he was harassed and victimized by his ex employers. He had 2 FIR’s registered against him, 1st FIR was registered in 2008 for stealing WAPDA’s equipments just before general elections in order to ruin his reputation amongst the people and 2nd FIR was registered while he was protesting against the load shedding (shortfall of electricity) in his hometown of Mianchanu. The worst was yet to come as he was on the receiving end of targeted shooting in 2013 and again in 2014 by his political opponents. He specifically had threats from the PML N’s (Pakistan Muslim League Noon) workers. The vain family of Mian Chanu was against of him from the start of his career because he used to point out and criticize from his early childhood at school level and later college. ch munir ahmed gujjar faced extreme level of victimization but he is till standing with his cause and ideology.

Refuge:
After these life threatening attacks, he gave up politics and left Pakistan to find refuge in Sweden and he still lives there and runs a successful business, he is waiting for right time to come he is very popular and still in the local politics of his area. He is going to contest election from PP-208 most probably.

February 07, 2019
On 7th January Ch, Munir Ahmed Gujjar announced officially that he is going to start NGO internationally to support and work for poor people who are suffering. He further said that he plans to promote this cause globally.  At first, he planned to name the foundation on his mentor name "Shaheed Haji Allah dita" but because of some reservation of his colleagues he decided to launch on the name of " Chaudhary Rehmat Ali Khan"  He asked people to support him in this cause.
Post a Comment
Read more